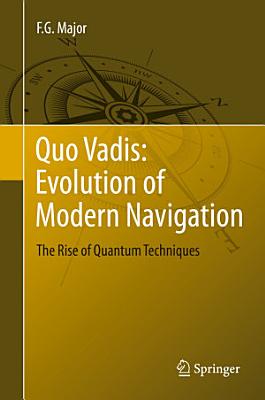 Quo Vadis: Evolution of Modern Navigation presents an intelligent and intelligible account of the essential principles underlying the design of satellite navigational systems—with introductory chapters placing them in context with the early development of navigational methods. The material is organized roughly as follows: the first third of the book deals with navigation in the natural world, the early history of navigation, navigating by the stars, precise mechanical chronometers for the determination of longitude at sea, and the development of precise quartz controlled clocks. Then, the reader is introduced to quantum ideas as a lead in to a discussion of microwave and optical interactions with atoms, atomic clocks, laser gyrocompasses, and time based navigation. The final third of the book deals with satellite-based systems, including orbit theory, early satellite navigation systems, and a detailed treatment of the Global Positioning System (GPS). Intended for non-specialists with some knowledge of physics or engineering at the college level, this book covers in an intuitive manner a broad range of topics relevant to the evolution of surface and space navigation, with minimum mathematical formalism.

Of Clocks and Time

Authors: Lutz Hüwel
Categories: Science
Of Clocks and Time takes readers on a five-stop journey through the physics and technology (and occasional bits of applications and history) of timekeeping. On

The Review of Reviews